Reece James: "Just to play my first game here at the Bridge, in front of all the fans, that was probably the best occasion, Obviously, it’s a dream come true.

- September 27, 2019
Reece James has admitted that playing at Stamford Bridge for Chelsea was a "dream come true" as he looks to follow in the footsteps of his childhood heroes.

The 19-year-old put in an impressive performance on his first-team debut for the Blues, scoring the fifth goal in their 7-1 win over Grimsby Town in the Carabao Cup on Wednesday.

And James, who has been with the club's academy since the age of seven, has revealed he looked up to the likes of John Terry, Didier Drogba and current Chelsea manager Frank Lampard as a child, and is keen to emulate their succes in west London.

"Just to play my first game here at the Bridge, in front of all the fans, that was probably the best occasion," he told reporters. "Obviously, it’s a dream come true.

"I’ve played for this club since I was seven years old and it’s always what I wanted.

"I’d played in front of a few crowds before but nothing like a full Stamford Bridge. I’m a little bit familiar with it but it was alright.

"I didn’t [think about my goal celebration]. Even if I did, I was just shocked at that moment. I’m just thankful I got the goal and we got the win.

"[Lampard] told me the day before but I think it doesn’t settle in until you’re actually out there on the pitch. The atmosphere was buzzing, the stadium, everyone was jumping. When I was young, I supported the club and still do now.

"I probably looked up to Drogba, Terry, Lampard. They were the main three leaders. It helped drive the team back then when I was a little kid. They were all winners. That was reflected in the trophies they won."

As well as his goal James also provided two assists from right-back for team-mates Michy Batshuayi and Kurt Zouma to score against their League Two opponents.

His attacking capabilities stood out last season during a superb loan spell with Wigan Athletic, with his displays both at right-back and in central midfield earning him a place in the EFL Team of the Year for 2018-19.

He was one of 10 academy graduates to appear against Grimsby, with James among four players making their debut for the club as Lampard continues to turn to youth amid a transfer ban at the Premier League giants.
And James admits that he was not expecting to get his chance so soon, particularly given the club's success under Maurizio Sarri last term.

"At the time I wasn’t sure because the team did well last season, winning the Europa League," he said. "I decided to take it as it comes really and when I found out I was staying, I was obviously happy. I’m glad I'm getting my chance. 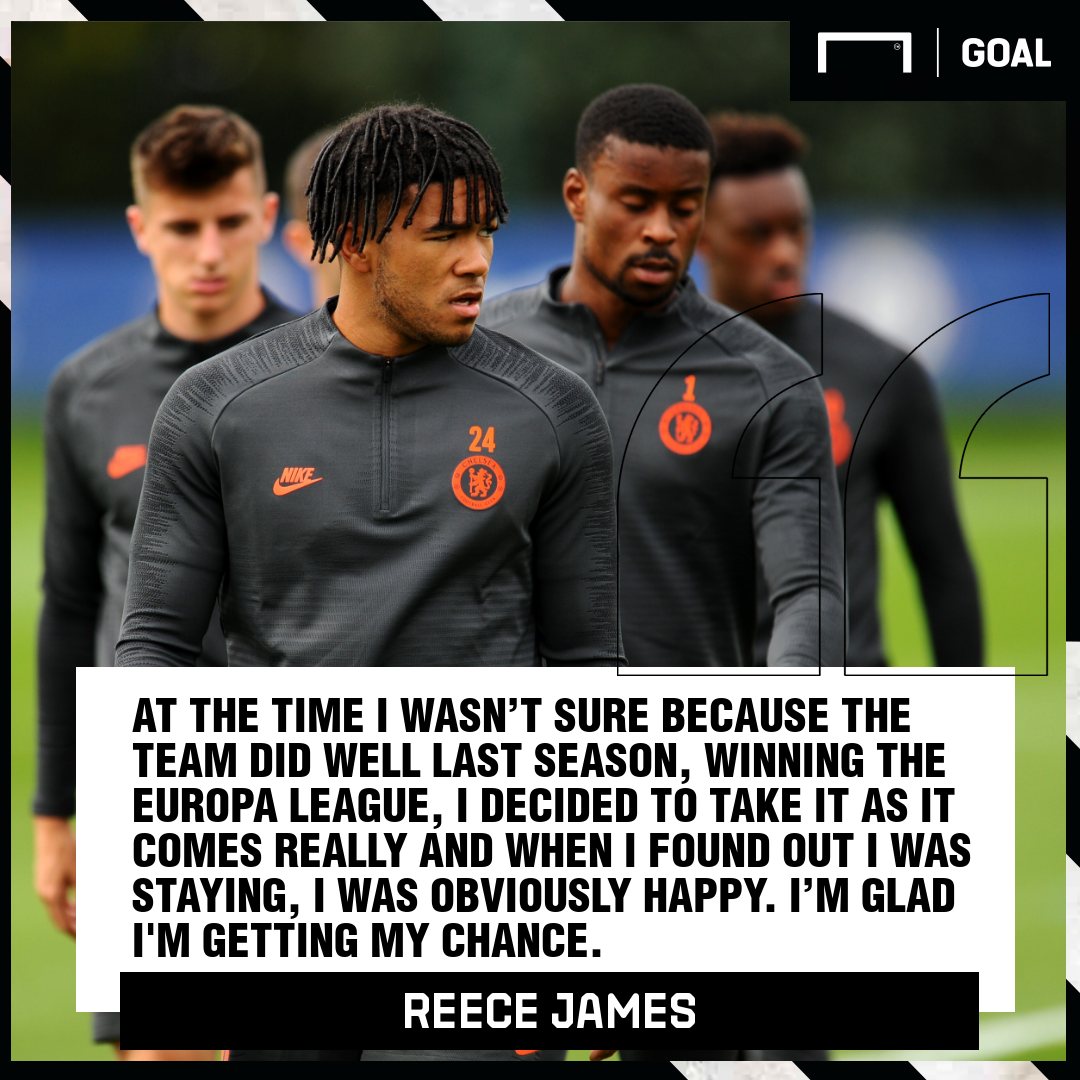 "If you look at the past few years there probably isn’t as many who have played. Out there today there were four or five of us that got on the pitch. That’s great for the academy. It shows the level and standard there is very good.
"Of course, looking at other young players getting a chance gives you a boost."
James has had to wait for his chance this season after he picked up an ankle injury in pre-season that required surgery.
He has gradually worked his way back to full fitness, and is now ready to continue his development and learn from the likes of club captain Cesar Azpilicueta, who plays in the same position.
"Of course I’m learning every day because I’ve not played at this level before. There are little bits here and there where they help me on the performance side and show me how it's done. Yeah, [I am learning] positioning, everything.
"Where to go where the ball is on the other side. There’s loads of little things.
"I'm not sure what's going to happen in the weeks ahead. I have to take it as it comes. If I’m involved, then I’ll be happy, and if I'm not, I’ll play again."